I got out of work early today, drove home and gathered the new puppies into the cat carrier. It was time for their first visit to the Vet. Mama Springer was not at all happy about her babies being put in there, but she wouldn’t have to be separated from them much, because she was going to the Vet also.  We were worried that Pepper might be bleeding a little too much (still) , so thought it best to have the vet check her out. She checked out A – OK, it was quite painless.

The Pups  however, didn’t fare so well. At least in the “painless” part. I am fairly certain when the Vet cut 2/3’s of their tails off, and removed their dew claws, they were not very happy. In any case, they are usually done at 3-5 days old, and so now this litter of pups have been done on day 3. Poor pups. Right now they are just sleeping in a pile with Pepper, when they aren’t eating. Eat and sleep, thats all they do right now… What a life! 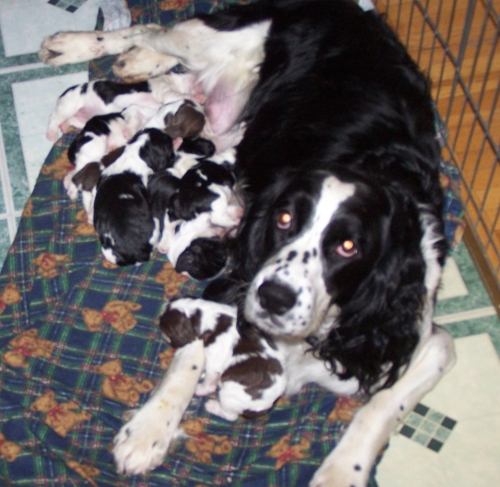 Well, That’s my update for today. We’ve decided on $550.00 per Puppy, which will include their Tails docked, dew claws removed, first puppy shots and vetcheck, as well as papers to get them AKC registered. Ciao for now

This entry was posted in Uncategorized. Bookmark the permalink.